What a week it has been.  I woke up Monday with a headache and sore throat. I felt congestion in my sinuses and was just sure I had a sinus infection.  I decided to wait to go to the doctor to see if it got worse.  Tuesday I woke up with dry mouth and it wasn’t any better.  I knew if it didn’t clear up I needed to go to urgent care first thing Wednesday to get some antibiotics.   Tuesday night James and I both got home from work late.  It was Shrove Tuesday so I was busy partying at the Hayes Barton UMC pancake dinner, and James was assisting with his youth groups spaghetti fundraiser.  When we arrived home I had completely forgot that our lights had flickered a lot that morning which wasn’t surprising because of the storm.  Unfortunately the heat had been off since around 9am leaving it only 62 degrees in our little house.  I called the power company and they said they would be out that evening to restore our heat.  I tried to stay up with James because I know its lame, but we always go to bed at the same time.  By 9pm I just couldn’t hold my eyes open any longer.  I went to bed while he waited for the heat to come on.

On Wednesday I woke up, and sure enough my sinuses still felt terrible and I knew I needed to go in.  I decided to go to minute clinic, because it was cheap and I knew I only needed antibiotics.  The NP checked my glands.  Nothing.  She gave me a strep test.  Nothing.  She checked for a fever.  Nothing.  She told me it was probably viral and to just treat the symptoms with Tylenol.  I told her that wasn’t a problem and I had some Alieve at home.   She then said, “Is there any chance you could be pregnant, because if you are you can’t take Alieve.”

Now I have to back up.  I had my IUD taken out in January, so yes, there was a chance I could be pregnant.  Woah.  I had heard stories of this happening, but if I were to be pregnant it was so early that I didn’t even think a test would be able to pick it up.  She told me she could test me there, but it would be cheaper for me to grab a home pregnancy test and take it at home.  Luckily the minute clinic was in the target so I grabbed a pregnancy test and nail polish and went home.

When I got home I peed on the stick and started to cook myself breakfast.   I thought I was pregnant last month and was wrong, so surely this early I wasn’t going to be now.  I honestly forgot the test was sitting on the bathroom counter until I went to go use the bathroom.  Much to my surprise, this is what I saw: 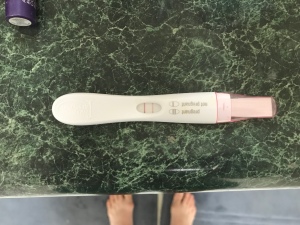 I panicked.  I wish I could say I had immediate excitement.  I didn’t expect it to happen like this.  I wanted James to be there when we found out.  “Oh gosh, oh gosh, oh gosh” is all I could get out.  I immediately called James.  I felt so bad that he wasn’t there for this.  When I told him we were pregnant he was calm, cool, and level headed. He told me to take a deep breath and stop pacing.  He left work and came home for his lunch break.  Times like these are why I married him.

When James got home I showed him the test.  He smiled and kissed my forehead.  I had planned to get to work at a normal time that day, but this was what I needed.  We snuggled and he calmed me.  I love that man.

View all posts by joyvanstaalduinen